This review contains minor spoilers for The Bone Season and The Mime Order.
Many thanks to the people at Bloomsbury for providing me with a review copy of this wonderful sequel.

WELCOME TO SCION. NO SAFER PLACE. 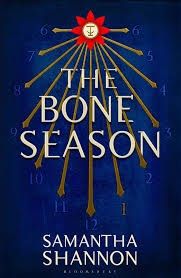 The year is 2059. Paige Mahoney is working in the criminal underworld of Scion London. Her job: to scout for information by breaking into people’s minds. For Paige is a dreamwalker, a rare kind of clairvoyant – and under Scion law, she commits treason simply by breathing.
Elsewhere, however, there is a seat of power even greater than Scion. And they have a different design for Paige and her uncommon abilities…

Last year, I picked up a copy of The Bone Season, based on a recommendation from a friend. I was instantly grabbed by Shannon’s prose, and devoured it within days. Now The Mime Order is finally here, and I was ecstatic to receive a review copy.

Hailed as a supernatural dystopian series, The Bone Season was the first of seven books, and was full of intricate characters and brutal locations, all vividly described. The Mime Order picks up where The Bone Season left off, right in the middle of the action, and immediately draws you into the suspense.

Paige Mahoney, along with several other prisoners, has escaped the brutal prison camp of Sheol I, where they were submitted to unspeakable horrors. But Paige’s problems are only just beginning. Nashira, the blood-sovereign, holds the strings of the puppet government of Scion, and has declared Paige to be the most wanted voyant in London. The streets are full of Vigiles, hunting Paige and the other escaped voyants, and creating disorder among all.

Despite Scion watching her so closely, Paige finds a way to reach some of the other voyants, and together they plot to expose the Rephaim and the true horrors of the penal colony. But Nashira is always one step ahead.

At the same time, disaster befalls the Underlord of the Unnatural Assembly, and so the mime-lords and mime-queens are called to attend and participate in a scrimmage, in order to determine who will rule over them all. As the White Binder readies for the fight, Paige must resist his control, and prepare herself for betrayal. Between dodging her mime-lord,

checking on the other fugitives, and hiding in the shadows from Scion, Paige must also find Warden, who didn’t make it on to the train out of Sheol I. Without him and the other Ranthen, Paige and her allies will have a hard time taking on Scion and its powerful puppet-masters.

This book is packed with action, jumping from one intrigue to the next, and will keep you guessing until the very last page. Secrets and betrayal are around every corner; as soon as you jump on the train heading out of Sheol I, you enter a world full of tension, danger, and mystery.

The Mime Order is a brilliant sequel. Although it seemed like things took a while to get going, once the pace picked up, I found it hard to put the book down. Everything explodes towards the end, with a brilliantly intriguing cliff-hanger. I’m sure I’m not the only one who’s eagerly awaiting the next installment in this fabulous series.

To read my interview with Samantha Shannon, click here, or visit Lovereading.co.uk.

5 thoughts on “Book Review: The Mime Order by Samantha Shannon”