Yep, you read that right. While at Worldcon, I had the absolute honour of speaking to George RR Martin.

George RR Martin is, of course, a man who needs no introduction. Not only is he the author of A Song of Ice and Fire, the inspiration for the HBO series Game of Thrones, but the rest of his bibliography is also extremely impressive. Fevre Dream, Tuf Voyaging, The Ice Dragon.. and then there’s the TV shows he was involved with – the Twilight Zone, Doorways, Beauty and the Beast. The list of accomplishments is endless. 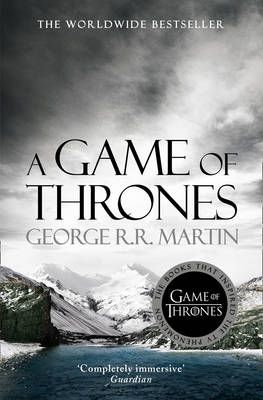 Martin was born September 20, 1948 in Bayonne, New Jersey. He began writing at a very young age, selling selling monster stories to other neighborhood children for pennies, dramatic readings included. Later he became a comic book fan and collector in high school, and began to write fiction for comic fanzines. Martin’s first professional sale was made in 1970 at age 21: “The Hero,” sold to Galaxy, published in February, 1971 issue.

Martin received a B.S. in Journalism from Northwestern University, Illinois, in 1970, and a M.S. in Journalism in 1971. Martin became a full-time writer in 1979. He was writer-in-residence at Clarke College from 1978-79.

Through the star that is Johannah Playford, I managed to organise an interview with George while he was in London for Worldcon. Giddy, yet determined to remain professional, I arrived at the Sunborn Yacht Hotel, and was immediately thrown off-balance. The moment I stepped off the lift, I was greeted by a smartly-dressed gentleman, who referred to me as “madam”. Well, I say. I lurked for a while, looking conspicious, before being rescued by the lovely Pat, who really helped me relax.

Soon enough, I was shown upstairs, and arranged myself at the table in a lovely hotel room. Once again, I made my best attempt to look professional, silently giving myself motivational speeches, and praying that I didn’t make myself look like a total fool. And, once again, I was thrown off-balance. George himself came in and, once he had settled himself on the sofa, began asking me questions. The idea that he was even remotely interested in me was astounding. It led to a lovely discussion about Plymouth, and his visit to the Old Barbican (a must-visit for anyone in the area) in 1981. As if I needed another reason to love this guy.

I began by asking him if he had any tips for aspiring writers.

For people in science fiction and fantasy, I tell them to start with short stories. I hear from far too many young writers, who, perhaps influenced by me or other people they’ve read, write me and say, “yes, I’m 17 years old and I’m writing a seven book fantasy series.” That’s like saying you’re going to take up rock climbing, and starting with Mount Everest. You don’t wanna start with that.

Write a short story, he says. Begin it, and finish it. Put it on the market, forget about it, then start a new story the next day. Keep those stories circulating.

And see at least if you can get some personalised rejection letters. Most writers go through long periods of rejection.. Steel yourself for rejection.

He also pointed out the FAQ section on his website for more information.

Over his long, successful career, Martin learnt that it’s all about the characters.

I began with books, with short stories. I wrote those for 15, 16 years before I first got involved in television. I worked primarily in TV and film for 10 years, before I went back to books, which were my first love.. It’s all storytelling, but it ultimately still begins and ends with the same thing – do you have a good story, do you have good characters? Characters the readers will care about, characters that are engrossing, compelling.. They no longer have to be likeable, they just have to be interesting, and engage the reader on some level.

So who and what inspires such amazing stories?

I mentioned that I’d seen him at an event a couple of years ago, and he’d said that he wished he was more like Tyrion Lannister.

When you’re writing, you can make someone very witty. I can come up with witty lines, but it usually takes me a long time. I wish I would be Jon Snow, the great hero, but I’m probably more like Samwell Tarly.

Martin is still working on The Winds of Winter, the next novel in the Song of Ice and Fire series, and will then move on to the final book, A Dream of Spring. He also has many ideas for more Dunk & Egg stories, which are set in Westeros, around 90 years before A Game of Thrones, two of which currently ‘exist in fragmentary form’. Martin will also be working on some science fiction stories, a Wildcard novel, and possibly a sequel to Fevre Dream.

I’ve also considered finishing my unpublished, uncompleted novel, Black and White and Red All Over.

The World of Ice and Fire, which was co-written by Elio Garcia and Linda Antonssen, the founders of the renowned fan site Westeros.org, will be released this October.

Despite working so incredibly hard, Martin still has time to read:

I read constantly. On the flight over here, I finished The Widow’s House by Daniel Abraham, [which is] great, terrific. I also read the new Robin Hobb, Fool’s Assassin, and I have a bunch of other things on my Kindle that I’ll probably tackle before I go home.

Now Worldcon is over, Martin is off to Los Angeles for the Emmy awards.

Everything in the world that I have to say has been said about 50 million times.

Even so, I very much appreciate George taking the time of out of his busy schedule to say everything again to me. He is one of the nicest guys I’ve ever met, and it was a genuine pleasure to spend some time with him. I’m glad I didn’t try to take a selfie with him though!

A Song of Ice and Fire, and many of George’s other books, are available on Lovereading.co.uk, the UK’s No1 book recommendation site. 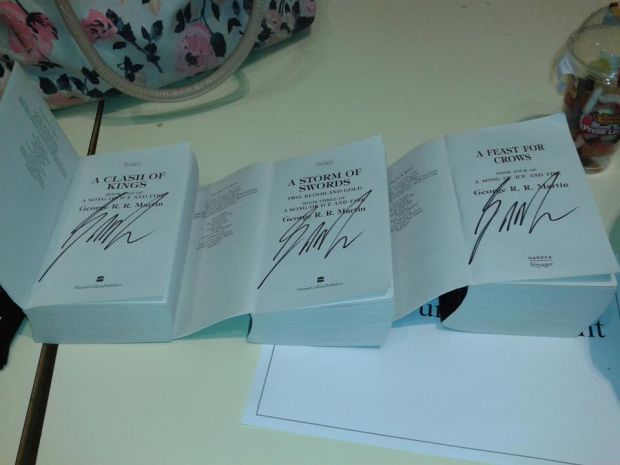